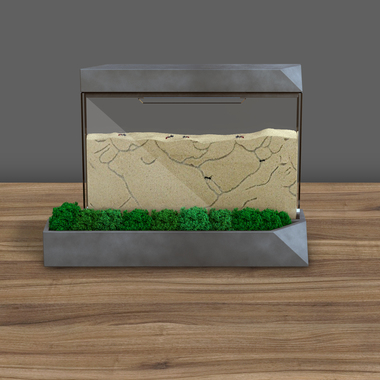 Background:   Scientific studies have repeatedly shown that observations of nature positively affect the mental state of a person, his stress resistance and performance, especially for residents of large cities. For example, British scientists from the University of Essex found out that if a person observes nature scenes before being stressed, he comes to his senses faster. Italian scientists from the University of Padova set out to find out whether images of wildlife help get rid of fatigue for those who work a lot with their heads. After conducting a series of experiments, they confirmed the hunch: green leaves, twigs, flowers, and other grace help regain the ability to concentrate.   Living in a large metropolis and working in an office, I know firsthand how sometimes a corner of nature is missing. This prompted me to create a desktop ant farm for the working area for those who work a lot and who lack solitude with nature in the conditions of modern city life. Description: The main inspiration for the design was the urban environment of a large city. And I wanted to express in the project how the modern urban environment merges and coexists with wild nature. This design illustrates the symbiosis of human creations with the creations of Mother Nature, which always complement each other in my opinion and create unique masterpieces for aesthetic perception. This product consists of 3 parts: a terrarium, stands and covers. There is a ventilation hole in the Terrarium, a place for greenery is allocated in the stand. The main idea is that this farm is suitable for people who do not have time for special care. Therefore, for this design, I chose stabilized moss as an element of greenery.