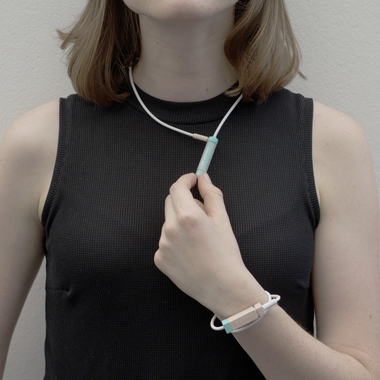 Being told that you have a lifelong, incurable, eyesight problem is a terrifying prospect; one that is very difficult to come to terms with. Quality of life visual impairment affects approximately 1 in 28, people over 40 with 2 million people in the UK living with sight loss. Contrary to popular belief, full blindness is relatively uncommon, with 18% (360,000) of visually impaired people registered as legally blind, and the remaining 1.64 million retaining partial sight. For the visually impaired, retaining independence in day-to-day life is important. However, navigation can be a long-winded, potentially unsafe process, especially in new environments or at night. Simple tasks like travelling to work can become arduous and time-consuming and more often than not, need planning beforehand. Using audio-based devices takes away hearing, the dominant remaining sense for danger and hazard awareness. A product needed to be developed that could help assist visually impaired people in day to day life, without using audio or distracting from their hearing. A major part of the project was developing the effectiveness of hazard perception and the intuitiveness of tactile feedback. This was tackled through iterative electronics design prototyping and sensor testing. Current assistive devices and sensing products (think parking sensors) detect via ultrasonic sensors - sounds is pinged out, reflected off an object and returns to the sensor as a signal. These components are cheap, however, they tend to be bulky and can often be unreliable. Maptic works by detecting obstacles and objects in front of visually impaired people and translating it into vibrations on the body. Similar to how SONAR works, Maptic uses ultraviolet light instead to detect objects, and frequent vibrations of varying intensity to alert users of objects on the left and right sides of the body - and how far away they are. Using these vibrations, they can navigate around obstacles, as a tactile alternative to sight. Maptic can also assist with GPS navigation to a location, directing the user via vibrations, rather than using audio which is how it is currently used. Instead of using an in-built GPS module into the circuitry, increasing the size of the units while decreasing battery life, it was chosen to link the Maptic units to a smartphone, using the current GPS capabilities of the phone and Google Maps API to provide the data for navigation. A custom app was built with high-contrast colours and shapes, allowing the user to simply tap to go home, or a couple of swipes to a chosen destination. The app also allows the user to check on the status of the units, and if they are paired correctly.