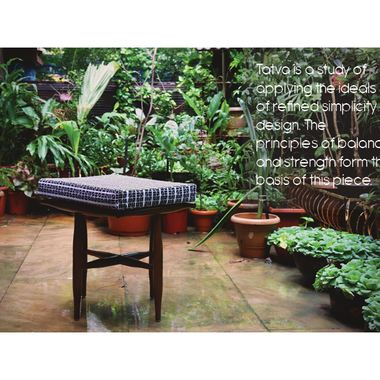 Drawing inspirations from the design sensibilities of George Nakashima, the inception of the concept for TATVA eventuated in NID, Ahmedabad. Analyzing the designs of George Nakashima led to various inferences; one major being the identification of a significant language. This proved to be of supreme importance towards deriving the structure of the stool. Additionally, the tapering legs and the varying thickness are features suggestive of its distinguished form. The use of reclaimed wood, from the old doors and window frames, not only contributes to its strength but also leads with it a wide scope of experienced grains. Structurally the tie members suffice the role of the main joinery leading towards coalescing four independent members. The effectuation of the central joinery, a half-lap joint of two cylindrical sections, posed to be a major challenge. A fabric printed and treated with an innovative colorant from industrial waste called ‘soot’ proffers an organic and sustainable alternative to the upholstery. The prints are modern and playful. The loose seat, secured by the knots below, offers an advantage of easily replacing the cover by detaching the knots. The primary challenge behind this pilot project was to redesign a basic ‘stool’ to its maximum potential keeping in mind- the nature and behavior of reclaimed wood, the skill set of the carpenter in achieving maximum precision and lastly substantiating the aesthetics of the structure. Tatva, though a small piece of furniture, emerged as an arduous endeavor.