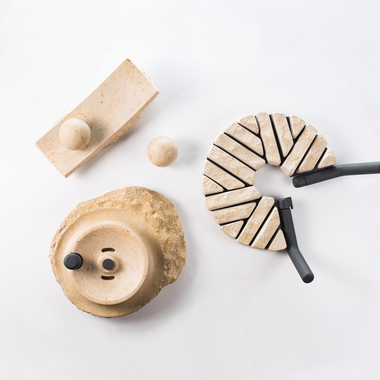 Preparing and cooking food symbolize one of the turning point of human evolution, man became a social and cultural being. Nowadays, in the kitchen, the modern user surrounds himself with advance technologies utensils and products, the most with minimal effort, and no processing, providing immediate results. Going backwards to the primary and early process, to a physical work through a raw and natural material that has been processed and adapted to the new era user by multiple technologies, makes possible the old and new connection, the reminiscence of preparing food, creating an intimate early experience in the heart of the contemporary kitchen. Millstone- The millstone remained faithful to the ancient one in terms of functionality; a personal customization was added to fit and be adequate to the habits of a modern user. On the central axis there is a pushing element and the nub in the center of the upper stone enables to tight the two stones, it controls and regulates the type of grinding and the thickness of the grain. The pattern lines at the bottom of the upper and lower stone is made by sand blasting, it allows the rotate motion necessary to eject the grind grain outside. Mortar and pestle- To create a modern design, I chose the earliest and primitive version of mortar and pestle, a pebble on a stone surface for the operation of friction. The ball on the rectangular slide seems like a ludic activity in the grinding and crushing process. The movement is more linear and bigger than the normal, implicates a physical effort. The pattern on the ball made by sand blasting makes possible to hold on the seeds in the grinding process. Stones for baking - Stone for baking, cooking and warming is a way back to the cultural and emotional connection between man and material and experience. The idea in this product was to bring the feeling of the fire to the modern kitchen by the “domestication” of the primitive stone in the most radical technology involvement. The stone pattern is heated in the oven, and when the stones are hot they can be placed on an external surface and could be used for baking, cooking and warming like it was used in ancient times. Between two stone ranges, a silicone for baking in an oven, creating softness and movement. It can be closed and connected by the handle to function as a 3d surface for backing thin bread or stay open on the dinner table and preserve the required temperatures of the food during the meal. ROOTS project is focused on the emotional relationship and interaction between man and machine, and its result. The principal aim is to give back a place to human presence and personal touch in the early and intimate process of preparing and cooking food in the contemporary domestic kitchen, with the help of high technology processing and the combination of raw materials.