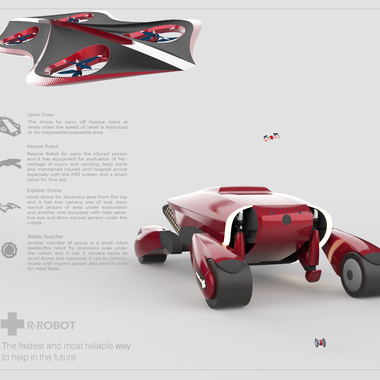 Rescue robot is a vehicle that provides rescue services, including diagnosis and rescue of injured people, early relief, accurate diagnosis of injury and knowledge of the hospital or center. This robot has an effective role in accelerating the relief work and more accurately doing it. Every year, in natural or abnormal events, such as fire, building collapse, etc... due to the uncertainty of the number of wounded and the amount of their injuries they are not timely addressed, which would cause them to be lost. The rescue robot actually increases the quality of rescue operations. This device reduces the amount of money people pay for death and injury in accidents. These robots carry out operations such as removing the rubbish, carrying people, informing people from the exact condition of the injured and the first aid. And it has the ability to communicate with a specialist doctor with a monitoring system and the ability to carry the broken parts (body) in the sterile area and also has a special MRI system. The robot also plays an important role in reducing the cost of relief to relief groups, such as the cost of preparing equipment and specialized people, and sending relief mediators to life-threatening incidents. This device can be controlled by the remote control system alone and performs operations.